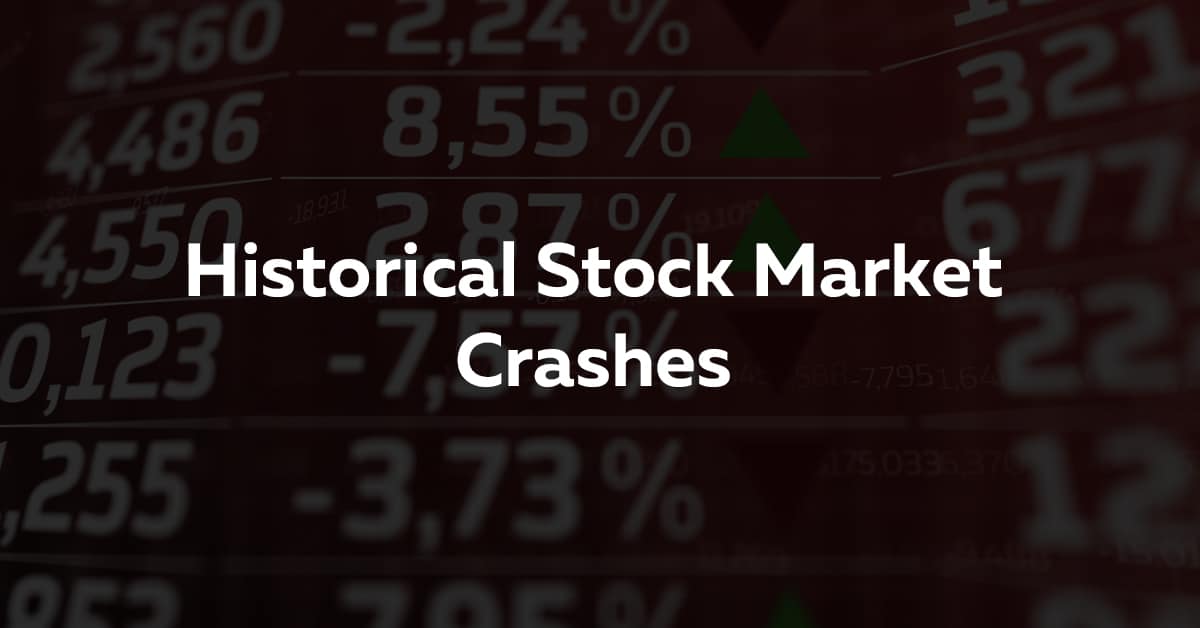 This article talks about a few historical stock market crashes, the cause, the duration, and the solution.

Long story short, all recessions have an end and if you’re prepared to buy stocks during a recession, the results can be positively life-changing.

Cause: In 1970, inflation reached 5.5% and then continued to trend up to 14.4% in 1980. Unemployment eventually reached 7% by 1980 and 11% by 1982. Through the 1970s, economists and policymakers believed they could lower unemployment by throttling interest rates up and down, a strategy known as the Phillips Curve. The Phillips Curve is a “stop-go” process. During the “go” periods, the Fed lowered interest rates to loosen the money supply and target lower unemployment. During the “stop” periods, when inflation rises, the Fed would raise interest rates to reduce inflationary pressure. The Phillips Curve strategy proved unstable, as inflation and unemployment increased together. President Ronald Reagan came into office in 1981 and introduced the Economic Recovery Tax Act of 1981. His plan was to lower taxes and help fuel the economy. The highest tax bracket went from 70% down to 50% and the lowest bracket went from 15% down to 11%. Unfortunately, the strategy of lowering taxes did not improve the economy and the Economic Recovery Tax Act of 1981 was reversed in September of 1982. This proved the point that raising or lowering taxes does not impact the overall economy because spending, saving, and tax behavior can vary per person. A more universal strategy needs to be applied which is where interest rates come in. Fed Chair, Paul Volcker, (The Jerome Powell of the late 70s and majority of the 80s) calculated that raising interest rates was the only way to lower inflation. At the time, Congress pushed him to stop raising rates but he held his ground and said we must sustain higher interest rates for a long-term fix. By October 1982, inflation had fallen to 5 percent and long-run interest rates began to decline. The recession lasted from July of 1981 to November 1982 and was considered the worst economic downturn since the Great Depression.

Solution: Fed Chair, Paul Volcker, kept increasing interest rates no matter if people liked it or not. It’s proven to be the only way to back down inflation.

Cause: There wasn’t a specific pinpoint cause but there were two large contributing factors.  First, computer trading or “program trading” was relatively new to the markets in the mid-1980s. Computers enabled brokers to place large orders and implement trades more quickly. These computers were programmed to automatically execute stop-loss orders, selling out positions, if stocks dropped by a specific percentage. On Black Monday the stop-loss selling began which created a domino effect of massive selling as the market dropped. Second, Portfolio Insurance was a new product introduced to the market. Portfolio insurance allowed large institutional investors to hedge their stock portfolios by taking short positions in S&P 500 futures. In other words, portfolio insurance was designed to automatically increase the value of their portfolio if there was a significant decline in stock prices. As stock prices declined, large investors sold short more S&P 500 futures. The downward pressure in the futures market put more selling pressure on the overall stock market, which also created a domino effect selloff.

Cause: Between 1995 and 2000, the Nasdaq increased by 400%. This time period was indeed a bubble. There was a lot of hype behind tech stocks. Businesses would literally add a “.com” to their name and their share price would skyrocket. In March of 2000, Barron’s featured an article titled “Burning Up; Warning: Internet companies are running out of cash—fast”, which predicted the bankruptcy of a lot of Internet companies. In other words, the truth was revealed. Most of these internet businesses had absolutely terrible financial statements. Investors began to rethink their investments and the selloff began. The S&P 500 went down 10% that year but the Nasdaq went down 39%. The next two years were also well into the negative for both the S&P 500 and the Nasdaq.

Solution: This taught investors to pay close attention to financial statements. If a stock has a lot of hype, take a look at Tykr or do a manual analysis of the income statement, cash flow statement, and balance sheet. If the financials look awful, it’s advised you keep looking for other stocks.

Cause: After 2001, the prime rate in the US (the interest rate that banks charge their low-risk customers) had enabled banks to issue mortgage loans at lower interest rates to millions of customers who typically would not have qualified for mortgage loans in the first place due to bad credit and inconsistent income. This in turn increased the demand for new housing which pushed home prices higher. When interest rates finally began to increase in 2005, the demand for housing, even with qualified borrowers, declined, which caused home prices to fall. Due to higher interest rates, most subprime borrowers could no longer afford their loan payments. Nor could they save themselves, as they formerly could, by borrowing money against the value of their homes or by selling their homes for a profit. Many borrowers, both prime and subprime, found themselves “underwater,” meaning they owed more on their mortgage loans than their homes were actually worth. As the number of foreclosures increased, banks stopped lending to subprime customers, which further lowered demand as well as home prices.

As the subprime mortgage market collapsed, many banks found themselves in trouble, because a major portion of their assets were composed of subprime loans or bonds. The underlying subprime loans in any given mortgage-backed security were difficult to track, even for the institutions that owned them. This caused banks to doubt each other’s stability, leading to a credit freeze, which prevented banks from extending credit even to financially healthy consumers and businesses. Thereafter, businesses were forced to reduce their expenses, leading to massive underemployment and unemployment. This significantly reduced consumer confidence which reduced consumer spending. Overall, the domino effect caused a major global market crash. The S&P 500 went down 38% which was the lowest since the Great Depression Crash of 1931 when the S&P 500 declined 47%.

Solution: Obtaining a mortgage loan has become a highly rigorous process for residents in the US. For those of you who are entrepreneurs, you know how many hoops you have to jump through. Subprime lending is still provided by some lenders but fortunately the volumes are significantly less. This type of lending is most commonly referred to as predatory lending and the term “subprime” can also be known as “non-prime”. Large institutions still buy and sell mortgage-backed securities today but this product is not nearly as common as it was before the recession.  A market crash due to subprime mortgage lending likely won’t happen in near future.

How to profit from a recession

Key Point 1: Historical stock market crashes are typically shorter than we think. When a crash happens, a lot of people react like the crash will inevitably persist until the end of time. Fortunately, that’s far from the truth. Let’s take a close look at the numbers to see the recoveries.

When the market corrects, it can take off like a rocket and if you buy financially strong companies (companies with On Sale ratings in Tykr), you can make some impressive returns as seen with the examples above.

As Warren Buffett quotes “Only when the tide goes out do you discover who’s been swimming naked.” This can be interrupted to mean multiple things but from my standpoint, this means when the market goes down and the financials are revealed, we see how strong or weak a business really is.

Key Point 2: A recession is a perfect stockpiling opportunity. For those of you who have read through the Tykr onboarding, you know that all lessons lead up to the most important lesson of all which is known as “stockpiling” which I learned from my mentor, Phil Town (Checkout out his books Rule #1, Payback Time, and Invested). This is the strategy of buying On Sale stocks as the market goes down. As Warren Buffet quotes “Be fearful when others are greedy and greedy when others are fearful.” What this means is when a crash happens you should be excited!

What happens to most stocks during a crash is a major sell-off across the board regardless of the financials. Yes, some stocks can withstand a crash but most stocks fall which is what you actually want. I know this sounds contrary to popular belief but this is how average investors become millionaires and how millionaires become billionaires. Stockpiling is like a slingshot. The market will keep pulling down On Sale stocks but when the market turns around, businesses with strong financials can take off like a rocket!

To summarize, if you’re prepared for a recession, it can change your life.

* On Sale stocks listed in this article were calculated manually by taking 5 years of historical data leading up to the reported year. For example, to determine how Ford and Exxon performed in 1983, I had to pull data from the income statement, cash flow statement, and balance sheet from 1978 – 1982.