How long will this bear market last? 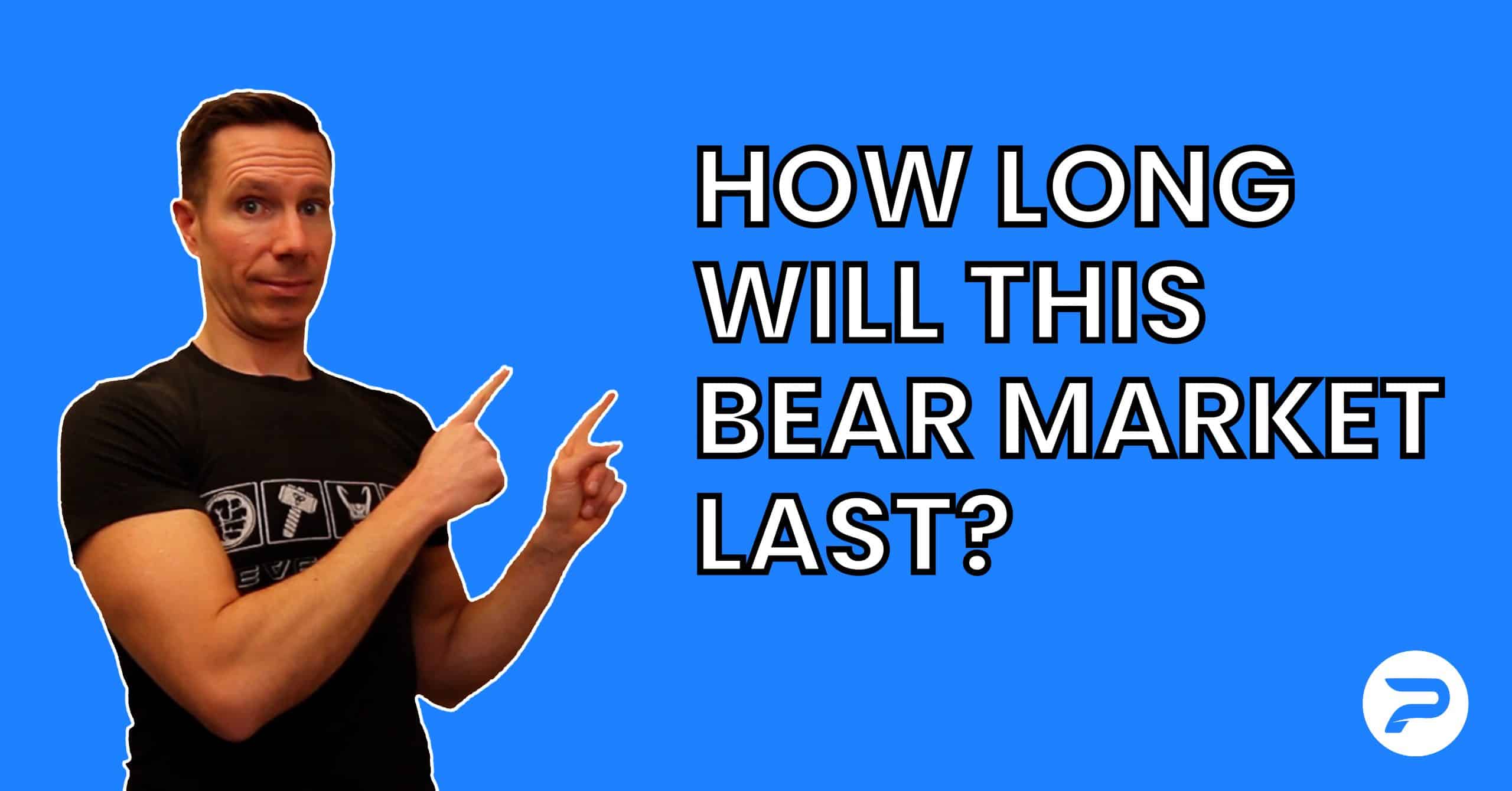 How long will this bear market last?

So the big question is how long will this bear market last? So instead of speculating, what we’re going to do is try to collect as much data as we can. We’ve got a few sources here, especially some comments people are making right now. We’re going to look at history a little bit too, but the overall goal is to create a little peace of mind. And then what I’m also going to do is talk about what I’m doing in the market as well.

So let’s dive in.

So what motivated me to create this video was a video clip from CNBC where they interviewed Kevin O’Leary, also known as Mr. Wonderful on the show Shark Tank. He said that there is a 0% chance we will face recession. And the number one reason why is the consumer is not rolled over. So what does he mean by that?

So if you look back in history, in 2008, we had the housing crash. Smp 500 went down about 38%. It created a domino effect around the globe where people stopped spending. There was a big hit to the consumer market where people stop buying things they want, whether it’s electronics or toys or vacations, nice dinners, whatever. That spending slowed down.

And what happened in 2009 help us get a little momentum. This wasn’t the sole reason we recovered after the big crash in 2008, but 2009, the market went up 24%. And what happened that year is our President at the time, US President Barack Obama, he introduced a stimulus package. And I might not be 100% on these numbers, but it was somewhere between $601,000 per person. I can’t remember if there’s one event or two stimulus, but either way, it wasn’t the amount of money that mattered.

What mattered was people got momentum talking about buying things. In other words, they buy this, they buy that, you start talking to their friends. That creates this confidence. The inverse happened when the market was going down and people became fearful. You go out, you talk to friends, you’re on the phone, whatever.

People are like, yeah, I need to cancel this vacation. I was going to go out and buy a new car. And I decided, you know what? I’m just going to hold on to my 1998 Ford Taurus or whatever. Those types of conversations is doom and gloom.

And that spreads like wildfire where the inverse happened with the positivity of people buying. And that creates that consumer momentum. People start buying things they don’t need. You’re in the checkout aisle, the grocery store, you’re buying this. That another thing that consumer spending, that momentum is really a positive thing to see.

So what Kevin is saying is we’re not experiencing any kind of slowdown. Consumers are still buying things. And I do agree with that. There’s a lot of people out there who are still buying stuff. They’re still going on vacations.

I know I’m still going on vacations. It’s a good thing to see it’s healthy for the market. So his comment there in a 0% recession, I don’t agree with that part. We may face that we’ll get to some other facts here shortly. But I do agree that the severity of consumers slowing down, it’s not like it was in 2008.

So that’s a good sign. Another thing he said in the same video is we need some major event to hit rock bottom, whether it’s he didn’t really get specifics. But I’m going to say something like maybe it’s a bankruptcy of some large Corporation or bank or something. It doesn’t mean the market’s going to really go down a whole lot more. It’s just a definitive event and time that’s going to trigger the bottom.

And then what’s going to happen is the market is going to start to recover and go up. So he says we’re about two thirds of the way there, which maybe not. But let’s look at some of the other sources here and we’ll start to kind of collect some data. So I’ve got another article here from Fortune.com and they brought some really helpful data to the table. So first off, they said in the last 19 bear markets, the market has gone down for an average about nine months and gone down about 37% as of today.

I think it’s the Nasdaq is down about 27% and the SMP 500 is down, I think close to 20%, maybe 18, something like that. So in this case, if you look at where I feel this started was somewhere just before the new year. So end of 2021, there was the Amicon variants. I started to see things kind of nosedive there. Then you have the tensions building between Russia and Ukraine and of course, the inflation rate.

So with those three things, the market started decline. Here we are, end of May and we’re at about the six month Mark. So nine months, could this go through summer? In my opinion, yes. And maybe we’re going to start to see recovery and fall in.

The same article actually says that based on this, we could start to see things return or start to go back up somewhere around October. If you’re buying stocks like I am right now, you’re still in this nice window of opportunities buy when the market is down because it doesn’t last forever. But let’s keep going here. So I found another article from Business Insider that talked about, yeah, they had David Rosenberg on. He said the SNP will crash probably another 17% down.

Now, in that case, if you’re at that 18%, 17%, that brings us to that average, as I previously said, about 37%, maybe just shy is the average bear market. So that’s going to get us pretty close. So that aligns well, now that’s the SMP 500, the Nasdaq, as we know, especially those who invest in tech stocks like myself, we experienced, in my opinion, most of the pain already. I don’t think we’re going to go down a whole lot more. If we do, it’s going to be a little bit.

That’s my opinion. I think at this point being 27% down, maybe we go north of 30 or I should say lower than 30%. But with SMP, I think it has a little more room to go down. So those are going to be the stocks that are non tech think like the big retail stocks like Walmart and Target. We saw some news this last week that people are still spending but the profit margins are declining just because of inflation.

So you kind of saw that coming. But interesting here. So a few of these articles are starting to align on the timing. Nine months or so is the estimated timeline. So let’s flip to the positive side here.

So I always talk about this with the SNP 502,008. I always phrase it to people when they start talking about the recession. And I’m like, I’ll kind of tee it up as I was a painful event. And people start agreeing like, yeah, we really felt it. And then I’ll ask them the question, how many years do you think it really lasted?

Well, as I said earlier in the video, it didn’t go down, went up 24%. And if you held or bought good stocks, really strong financials, your returns would be upwards of 75%, 100% if not more. And like, for example, I think a few boss I tested with ticker going back to that point. Like Nvidia was one on sale at the time. I think it was north of 100% return.

So we’re starting to see some interesting things happen here. There are people who are becoming fearful they’re selling when they’re down, which is the dumbest thing you can do. This article here is really motivating. So check this out. Reuters.com, they said in 2009, when that recovery happens, the world’s number of millionaires increased by 17%.

It was one of the largest millionaire creating events ever in history. And the main reason was the stock market. Now, those who listen to the podcast, I do like listening to people who are on real estate that really respect real estate. It’s a great way to create passive income. But the efficiency of building wealth, there’s nothing better than the stock market.

I mean, you can put in a million. Let’s say we use big numbers here. You put in a million and let’s say it’s a down year. And you see those businesses take off and they go north of 100% in one year, you can make another million on top of it. You can double your money.

And that’s where you see the rich getting rich these people will go in 10 million when they’re down and next thing they just turn it into 20 million. It’s that big momentum. I know a smaller number is like if it’s 5000, you turn it into ten it doesn’t feel like a big number because it’s obviously relatively smaller but the percentages are still the same. That efficiency of moving nothing can beat it. So I thought that was really interesting and then this was another statistic the people who are already millionaires the average net worth increase by 19% in that year alone that’s incredible.

So it didn’t take decades to increase by 19%. It was one year. So this goes back to what I’m doing right now which I alluded to a few minutes ago which is I’m buying as much as I can right now. I actually right now as we speak I have very little money in savings. I’m just sending everything right into the market.

If an emergency event any financial planner out there and say, hey, you got to keep your emergency fund available I’m deploying it right now and if something happens I will figure it out. So it’s a little risky but I’m in a good place so I’m really comfortable with this. So overall you’ve got two options. You can sit on the sideline and watch other people build their wealth or you can get in and start taking advantage of this amazing buying opportunity. So hopefully this video gives you a little context on the timing here.

This bear market maybe in fall we’ll see recover but overall, if it goes longer, continue buying more this is where these big wealth building events happen. Hopefully this helps. We’ll see you bye.
Share on Facebook Share on Twitter
Close
Search