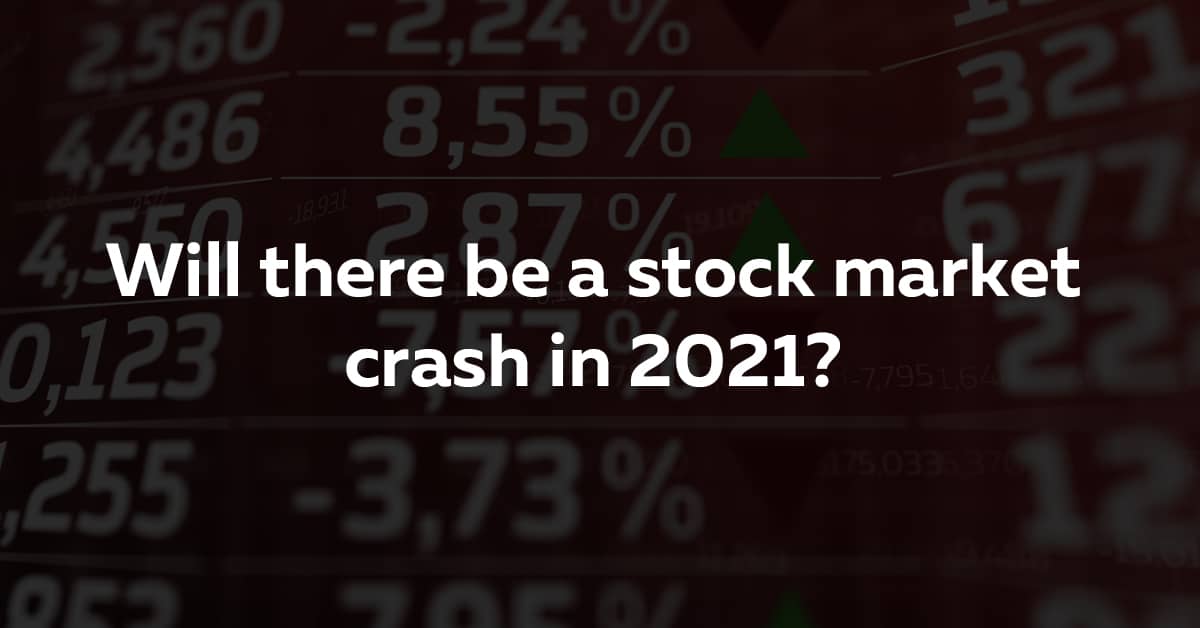 This article will shed a little light on market crashes and how you should prepare for them. Hopefully, this will help you sleep a little better at night.

Every year, for the last five years, the media as well as select financial guru’s have speculated the market will crash.

They were wrong every year.

Here is what happened the last five years.

There was a small pullback in 2018 but no crash.

Let’s take a look at the last three major stock market crashes in the US.

Cause: There wasn’t a specific pinpoint cause but there were two large contributing factors.  First, computer trading or “program trading” was relatively new to the markets in the mid-1980s. Computers enabled brokers to place large orders and implement trades more quickly. These computers were programmed to automatically execute stop-loss orders, selling out positions, if stocks dropped by a specific percentage. On Black Monday the stop-loss selling began which created a domino effect of massive selling as the market dropped. Second, Portfolio Insurance was a new product introduced to the market. Portfolio insurance allowed large institutional investors to hedge their stock portfolios by taking short positions in S&P 500 futures. In other words, portfolio insurance was designed to automatically increase the value of their portfolio if there was a significant decline in stock prices. As stock prices declined, large investors sold short more S&P 500 futures. The downward pressure in the futures market put more selling pressure on the overall stock market, which also created a domino effect selloff. Although this felt like doom and gloom at the time, the S&P 500 still went up by 2% that year.

Cause: Between 1995 and 2000, the Nasdaq increased by 400%. This time period was indeed a bubble. There was a lot of hype behind tech stocks. Businesses would literally add a “.com” to their name and their share price would skyrocket. In March of 2000, Barron’s featured an article titled “Burning Up; Warning: Internet companies are running out of cash—fast”, which predicted the bankruptcy of a lot of Internet companies. In other words, the truth was revealed. Most of these internet businesses had absolutely terrible financial statements. Investors began to rethink their investments and the selloff began. The S&P 500 went down 10% that year but the Nasdaq went down 39%. The next two years were also well into the negative for both the S&P 500 and the Nasdaq.

Solution: This taught investors to pay close attention to financial statements. If a stock has a lot of hype, take a look at Tykr or do a manual analysis of the income statement, cash flow statement, and balance sheet. If the financials look awful, it’s advised you keep looking for other stocks.

Cause: After 2001, the prime rate in the US (the interest rate that banks charge their low-risk customers) had enabled banks to issue mortgage loans at lower interest rates to millions of customers who typically would not have qualified for mortgage loans in the first place due to bad credit and inconsistent income. This in turn increased the demand for new housing which pushed home prices higher. When interest rates finally began to increase in 2005, the demand for housing, even with qualified borrowers, declined, which caused home prices to fall. Due to higher interest rates, most subprime borrowers could no longer afford their loan payments. Nor could they save themselves, as they formerly could, by borrowing money against the value of their homes or by selling their homes for a profit. Many borrowers, both prime and subprime, found themselves “underwater,” meaning they owed more on their mortgage loans than their homes were actually worth. As the number of foreclosures increased, banks stopped lending to subprime customers, which further lowered demand as well as home prices.

As the subprime mortgage market collapsed, many banks found themselves in trouble, because a major portion of their assets were composed of subprime loans or bonds. The underlying subprime loans in any given mortgage backed security were difficult to track, even for the institutions that owned them. This caused banks to doubt each other’s stability, leading to a credit freeze, which prevented banks from extending credit even to financially healthy consumers and businesses. Thereafter, businesses were forced to reduce their expenses, leading to massive underemployment and unemployment. This significantly reduced consumer confidence which reduced consumer spending. Overall, the domino effect caused a major global market crash. The S&P 500 went down 38% which was the lowest since the Great Depression Crash of 1931 where the S&P 500 declined 47%.

Solution: Obtaining a mortgage loan has become a highly rigorous process for residents in the US. For those of you who are entrepreneurs, you know how many hoops you have to jump through. Subprime lending is still provided by some lenders but fortunately the volumes are significantly less. This type of lending is most commonly referred to as predatory lending and the term “subprime” can also be known as “non-prime”. Large institutions still buy and sell mortgage-backed securities today but this product is not nearly as common as it was before the recession.  A market crash due to subprime mortgage lending likely won’t happen in near future.

Today, there have been a lot of discussions around the printing of money. Some people ask the question “who will pay this money back” when that isn’t the question that should be asked. The real question to pay attention to is “how fast will interest rates increase?” This is a question you and I can easily keep tabs on as the news will quickly announce when rates increase or decrease.

Based on this information we can expect interest rates to increase which will slow down the economy. If the Fed approaches this methodically, as opposed to abruptly, the market will slow and avoid a crash.

Is it possible to avoid a crash?

Absolutely. We’ve been able to avoid a crash the last 13 years. By comparison, Australia has gone 30 years since its last recession in 1991. Yes, the ASX did experience a pullback due to Covid-19 in 2020, like everyone else, but the ASX is currently at record highs as of July 2021. Here is a fascinating article from aph.gov.au on Australia’s impressive run over the last 30 years.

If we’re going to experience a crash, it most likely won’t be caused by the printing of money or the increase in inflation rates. Take a look at this chart from Macro Trends which shows the inflation rate every year, over the last 100+ years. If you pay close attention to the last 50 years, you’ll see there is no direct relationship between inflation rates and crashes. If a crash is to happen, it will probably be the result of multiple factors.

So the questions are, what will cause the next crash and when will it occur? If I had the skills to predict that, it would be like owning Grays Sports Almanac from Back to the Future. We all saw how Biff handled that kind of power. I would like to think I would handle it much differently but anyway, I digress. Predicting when the next crash will occur is more difficult than the how. In fact, predicting when is next to impossible but there are some people that managed to predict the how including Michael Burry (played by Christian Bale in the movie The Big Short) who predicted the cause of the Great Recession.

Regardless of what people say, you shouldn’t dwell on or worry about the next crash. Let people talk and just focus on on running your own race.

Here are some key points to keep in mind when it comes to market crashes and how you can come out on top.

Key Point 1: Crashes are typically shorter than we think. When a crash happens, a lot of people react like the crash will inevitably persist until the end of time. Fortunately, that’s far from the truth. Let’s take a close look at the numbers to see the recovery timelines.

Overall, this crash did span about 3 years but the gains in 2003 were outstanding. Although this downturn was longer than 1987, there were a few specific stocks that outperformed the market due to solid financials.

To provide some context, Tykr is soon releasing a graph feature that allows you to see the historical points in time when stocks change between On Sale, Watch, and Overpriced. This allows you to see if On Sale stocks truly go up and Overpriced stocks truly go down. (Spoiler alert: As of June 2021, I saw the results of a beta version and this feature is impressive! We expect this to go live in Q3 2021.)

The lessons to learn from the Dot-com Bubble and The Great Recession is to invest in businesses with strong financials. As Warren Buffett quotes “Only when the tide goes out do you discover who’s been swimming naked.” This can be interrupted to mean multiple things but from my standpoint, this means when the market goes down and the financials are revealed, we see how strong or weak a business really is. In other words, the stocks listed above had excellent financial statements and therefore performed well even during market crashes.

Key Point 2: A crash is a perfect stockpiling opportunity. For those of you who have read through the Tykr onboarding, you know that all lessons lead up to the most important lesson of all which is known as “stockpiling” which I learned from my mentor, Phil Town (Checkout out his books Rule #1, Payback Time, and Invested). This is the strategy of buying On Sale stocks as the market goes down. As Warren Buffet quotes “Be fearful when others are greedy and greedy when others are fearful.” What this means is when a crash happens you should be excited!

What happens to most stocks during a crash is a major selloff across the board regardless of the financials. Yes, some stocks can withstand a crash but most stocks fall which is what you actually want. I know this sounds contrary to popular belief but this is how average investors become millionaires and how millionaires become billionaires. Stockpiling is like a slingshot. The market will keep going down and so will On Sale stocks but that can rapidly change when the next quarterly or yearly statements are released. When those statements reveal the truth and show continuous financial strength, it’s like releasing the slingshot. Those stocks will take off like a rocket and you can generate massive returns in the market. Unfortunately, events like this don’t happen often. You have to be prepared.

As I explain in the Tykr investing tips onboarding, I recommend depositing money into your broker account (TD Ameritrade, Etrade, Firstrade, Interactive Brokers, eToro, etc) every month. I advise about 15% – 30% of your paycheck. Then, only invest 50% of that deposit into individual stocks with great financials. The other 50% should be saved for stockpiling events. As Phil Town states, “be ready to load up the truck.”

To summarize, if you’re prepared for a crash or a recession, it can change your life and Tykr can help you find great buying opportunities when the market is down.